The Windy City is widely known for its many attractions and features, from its unique museums to its impressive architecture. What really makes Chicago stand out from other cities is its delicious cuisine. When you try any of these tasty Chicago eats, you’re bound to enjoy some delightful flavors backed by the impressive history of the city.

You may have tried a hot dog, but have you tried a true Chicago dog? A Chicago hot dog is simmered or steamed, rather than boiled, and placed in a poppy seed bun. Toppings include diced white onions, tomato slices, bright green relish, dill pickles, celery salt, and hot peppers. Avoid asking for ketchup on your dog unless you’re prepared for disappointing looks from locals since it’s not a usual condiment found on a true Chicago hot dog.

Chicago dogs use all-beef franks, with Vienna Beef being a popular choice. Vienna Beef was founded in 1893 by Emil Reichel and Sam Ladany, who were immigrants from Austria and Hungary. They used domestic beef and a premium recipe then showcased their new frank at the Chicago World’s Fair, where everyone instantly loved it. In 1929, a boy named Abe Drexler took over his dad’s vegetable cart and started creating “depression dogs” with Vienna Beef franks and the now-classic toppings. These dogs soon became what is now known as Chicago dogs. 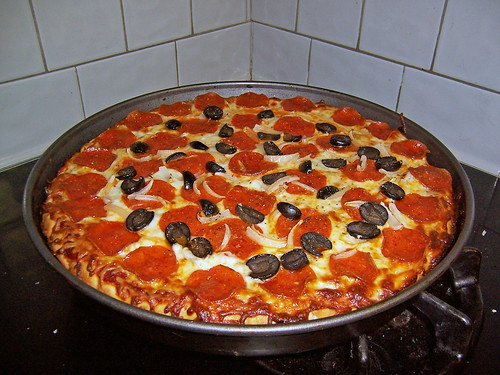 Many cities are popular for their pizzas, but Chicago deep dish pizza differs from most. Most Chicagoans aren’t usually fans of thin-crust pizzas. Instead, they enjoy pizza that’s at least an inch thick with buttery and crispy crust holding in several layers of ingredients.

Inside the pie is an entire sausage layer, piled high with mozzarella, onions, and green peppers, completed with tomato sauce on top. Since the many ingredients create a massively thick pizza, it’s easiest to dig into it using a knife and fork.

Between the late 1800s and early 1900s, European immigrants traveled to America to work in the factories. While they were here, many craved the thin pizzas that their home countries originated. In 1943, amid a large number of thin pizza restaurants, Ric Riccardo and Ike Sewell were ready for something different. They opened Pizzeria Uno, which featured a new type of pizza with a crispier crunch and several delicious layers. This pizza place still serves classic deep dish favorites in a majority of areas around the United States.

This sandwich contains a pile of seasoned and thinly sliced roast beef, au jus or “gravy,” as some call it, and your choice of peppers on an Italian roll. If you think it sounds messy, you’re correct. You’re going to need a few napkins when you eat this sandwich.

The beauty of ordering an Italian beef sandwich is it’s served several different ways. You can douse the entire thing in gravy, order it wet with additional gravy on top, or you can try it gravy on the side. Many establishments also offer either sweet or hot peppers to top it all off, and you can even find some places that will add provolone.

Many believe the founder of the Italian beef sandwich is Al Ferrari, who opened AI’s #1 Italian Beef in 1938, which is now a Chicago favorite. Before opening the restaurant, Ferrari would make sandwiches and other lunchtime meals at his house, then deliver them to blue-collar workers around the city.

He attended a wedding where he needed to serve a roast to 150 people. To accomplish this, Ferrari decided to thinly slice it, dip it in cooking juices, then place it on bread to make an appetizing sandwich for everyone. After rave reviews from wedding guests, he opened his restaurant in Chicago’s Little Italy, serving the famous Italian Beef sandwich.

Chicago has been a Midwestern meatpacking hub since the 1800s. Because of this, it should be no surprise that Chicago is home to delicious meats, especially its barbecue. Many Chicago barbecue cookers rely heavily on the taste of the meat rather than the sauce.

Rib tips are the most common barbecue meat you’ll find in Chicago, which is a cartilage-rich strip slathered in seasoning and usually marinated for 24 hours. Many people call the tips “meat candy,” and they’re often tender and chewy on the outside and juicy on the inside.

In the 1930s, many barbecue restaurants opened up after millions of African Americans traveled from the Mississippi Delta. They would cook barbecue by smoking meat directly over low heat and dousing it with sweet sauce. Little did they know, Eastern European immigrants were also traveling to Chicago at this time, bringing with them sausages and boiled meats. Chicago barbecue restaurants have since combined these two styles by both boiling and smoking their ribs and rib tips.

After trying these hearty Chicago meals, you may be in the mood for something sweet. The original rainbow cone is a classic treat served in Chicago. It contains the following ingredients:

All of these ingredients are piled high on a cake ice cream cone.

This delicious dessert was created by Joseph Sapp in 1926. He followed his dreams of opening an ice cream shop with his wife, Katherine. Believing ice cream lovers deserved more options than just chocolate and vanilla, he created the original rainbow cone and opened a shop called Original Rainbow Cone Lodge. You can still visit their store at 92nd and Western Avenue to try the legendary rainbow cone. They also have other sweet treats available like shakes, cake rolls, cakes, and other ice cream flavors.

These are some of our favorite foods that remind us of how unique our great city of Chicago is. No matter which food you try, you’re sure to enjoy each bite you take. Did we miss any of your local favorites? If we did, give us a call and let us know. We’d love to learn which famous Chicago eats you love the most.

Get a Free Quote

Get A Free Quote